The book has reached 15 European countries…

In the past month – after the visits to Scotland and Germany – I have exchanged knowledge and ideas about campus management with delegates from many European countries. On June 15 a Swiss delegation visited TU Delft, from ETH Zurich and – a week later – on June 22 I presented a paper at an academic conference (MISBE), which I will upload as soon as possible – see photo below. 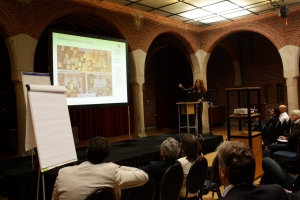 Last week I paid a fruitful visit to the European University Association in Brussels to talk about the relation between the campus and the financial sustainability of European universities. Again, it was confirmed that both the opportunities and threats of the campus are internationally recognized. In the meantime I also got enthusiastic messages (about the book) from Austria, Italy, Ireland and England. The most recent lecture (yesterday) was for a group of French delegates, representing universities that are about to become owners of their campuses – like in the Netherlands. Their visit was organized by Utrecht University in collaboration with the French Ministry of Education and Ecole des Ponts / ParisTech. Very interesting meetings… again… I feel blessed with my work.

PS The book has reached campus managers, policy makers and/or academics in 15 European countries (concluded from the messages I received and from data that the publisher sent me): Belgium, Iceland, Norway, Sweden, Denmark, Finland, Ireland, England, Scotland, France, Switzerland, Austria, Italy, Spain and Germany. And I know there are copies in Dubai, Colombia, Australia and the USA. I am very proud…

Filed under international network, the book